To share your memory on the wall of Salvatore Borello, sign in using one of the following options:

Consider providing a gift of comfort for the family of Salvatore Borello by sending flowers.

We encourage you to share your most beloved memories of Salvatore here, so that the family and other loved ones can always see it. You can upload cherished photographs, or share your favorite stories, and can even comment on those shared by others.

To Carmela and the entire family: My heartfelt sympathy and condolences. Thinking of you all as you journey thru this difficult time which has been made even more difficult because of the virus; not being able to visit or give each of you a big hug. " Those we love don't go away, they walk beside us every day."
Beatrice Pigozzo
Comment Share
Share via: 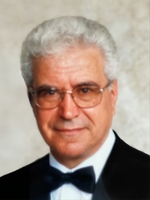