It is not always possible to pay respects in person, so we hope that this small token will help.

Offer a gift of comfort and beauty to a family suffering from loss.

A gift to your family, sparing them hard decisions at an emotional time.

What is a funeral? What are funeral rites? 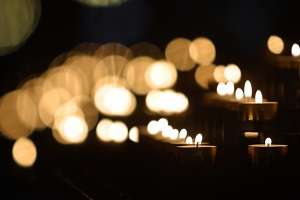 All we need to do is say the word "funeral" and within microseconds, you have an image in your mind of what a funeral looks like. This mental image comes from many sources: the geographical place, culture and society in which we live; our faith; our life experience. Obviously then, a funeral service in Borneo would look very different from one held in Tanzania; there are even significant differences between the funerals held in ethnically and/or geographically diverse regions of North America.

Yet, despite the differences, these funeral services have much in common. We invite you to read further to learn the really simple answer to the question "what is a funeral?" and "What are funeral rites?" Should you have questions about what you read here, we encourage you to call us at (705) 673-9591. One of our funeral professionals will be delighted to explore the commonalities behind the wide spectrum of funeral ceremonies seen around the world.

What is a Funeral?

No matter where it's held, a funeral is a structured ceremony, with a beginning, middle and end. Each is intended to engage the living participants in activities which will transform their status within the community, and provide mourners with a collective grieving experience. It's a socially-acceptable way for members of a community to re-affirm and express their social attachments.

Anthropologists label a funeral as a rite of passage, which affects everyone involved–including the deceased. His or her social status changes dramatically, from a living contributing member of the community to one whose contributions are in the past, and relegated to memory. But the status of each of the survivors– the immediate family most especially– has also changed.  In fact, the funeral service can be the start of a defined period of mourning for bereaved family members, marking this transition in a uniquely identifiable way.

It could be said then, the focus of a funeral - no matter where, no matter when - lies in acknowledging change. And without doubt, human beings (as individuals and as a community) have trouble dealing with profound changes like the death of an integral member of the group. When you take this perspective, it becomes easier to understand the importance of ceremonially acknowledging the tear in the social fabric and the symbolic restoration of its integrity.

What are Funeral Rites?

Funeral rites are the traditional ceremonies associated in connection with burial or cremation. These rites vary across religious groups often with a specific set of rules for what to do. If you would like to follow the funeral rites traditional to a particular religion and do not have someone to guide you, feel free to contact us and we will help you find helpful resources.

A funeral service, whether traditional or more modern (memorial service or celebration-of-life), has two functions: to acknowledge the death and lifetime achievements of an individual and to bring grieving family members and friends together in support of one another during this difficult time.

If you are interested in arranging Sudbury funeral services, we invite you to call one of our funeral homes in Sudbury at (705) 673-9591 to begin.

Funeral Services in Our Area

For families and individuals living in this region (as elsewhere in the nation), a funeral service can mean many things. Some fall back on what is commonly called a "traditional funeral"; others see that same traditional service as an emotionally unfulfilling event. Fortunately, thanks to a number of unique social forces, there are alternatives. Today, end-of-life commemorative services range from that "traditional" format, to a memorial service and the increasingly popular celebrations-of-life. If you have yet to realize the immense value of such a collective acknowledgement of loss, reach out to us. Call (705) 673-9591 to speak with one of our experienced funeral service professionals.