To share your memory on the wall of Walter Dawydiak, sign in using one of the following options:

While still in his teens, Ukraine was invaded by Nazis and Walter joined the junior arm of the OUN. Because of his age he saw no combat duty but became a POW in Italy for two years. As a result of these associations, some of his family were exiled to Siberia by the Russians. Under the hospices of the Vatican, he was able to get his senior matriculation, and when released from the POW camp, he was able to immigrate to Britain. While working in Manchester he continued his education in the University of London and the Ukrainian University of France.

In England Walter met and married Olga Liba. Upon communicating with her family in Canada, they decided to relocate to Manitoba and later settled in Sudbury, Ontario where Walter and Olga raised their four children. He was employed at INCO and retired in the position of shift boss at Copper Cliff.

Walter was a founding member of the Ukrainian Cultural Centre, where he taught a new generation about the history and culture of their forefathers. He also helped organize the Ukrainian Youth Association and participated in building a youth camp, called Bilohorshcha, on Ratter Lake. He also enjoyed many years singing tenor both at St. Mary's Church choir and the Luna-Lysenko choir. In his retirement years he made many trips to his beloved Ukraine. Walter's connections to his birth country were strong, but he always said he was a Canadian first.


Resting at the JACKSON AND BARNARD FUNERAL HOME
233 Larch St., Sudbury
Friends may visit on Tuesday, February 18th, 2017
from 5:30 PM - 7 PM, with Panakhyda at 7 PM
Funeral Mass on Wednesday, February 19th at 10 am
in St. Mary's Ukrainian Catholic Church
40 Notre Dame Ave.
Interment in the Civic Memorial Cemetery
Donations to the Alzheimer’s Society, Ukrainian Seniors Centre or a charity of your choice would be welcome.
Read Less

Consider providing a gift of comfort for the family of Walter Dawydiak by sending flowers.

We encourage you to share your most beloved memories of Walter here, so that the family and other loved ones can always see it. You can upload cherished photographs, or share your favorite stories, and can even comment on those shared by others.

Posted Feb 17, 2020 at 12:55pm
Mr. Walter Dawydiak and I have crossed paths many times for over 50 years. He was a founding member of the Ukrainian Cultural Centre, Ukrainian Youth Association and the League of Ukrainian Canadians previously known as the League for the Liberation of Ukraine of which I was an active participant.
Mr. Dawydiak was also a dedicated member of the Ukrainian Catholic Church and served as cantor for many years. His dedication to the Ukrainian community was an inspiring example to all.
I had the privilege to work with Walter at INCO for many years in the early ’70s and he was proud of his achievements while working with Dr. Curlook. They always remained close friends. He remained physically fit throughout his retirement however, dementia unfortunately took away his knowledge and his life experiences.
On behalf of the League of Ukrainian Canadians of Sudbury, I would like to express our dearest “spivchuvania” to the family.
May the soil of Canada rest lightly on him.
Spochyvat z Bohom
Vichnaya Pamiyat
William Zelenczuk

Posted Feb 16, 2020 at 11:44pm
At age 5. my Mom dressed me up to go meet my first ever aunt and uncle at the pontoon dock in town in north Manitoba. Uncle Walter then was the young man above, who I could easily coerce to the ice cream shop. This week, he appears as the older man in the above picture.. This time he is my last living uncle. I am sad that almost 70 years have passed.Sad that a man who explained the knowledge and learning of his life, died was robbed of these ideas when his dementia froze his mind. Perhaps he will rejoice in meeting his deceased family again... He will always be remembered.. To my First and Last uncle...Good bye...Jean Kozelko and family.
Comment Share
Share via:
BV

Posted Feb 16, 2020 at 05:15pm
My kindest thoughts and prayers to Walter's family.
I remember Walter from our days at the Cambrian Fitness Centre on Lorne Street.
He worked out at least 5 days a week and he shared with me his many stories of his youth, his time at INCO, and how proud he was of his children.
It has been a while since I last saw Walter. May he Rest in Peace!
Comment Share
Share via: 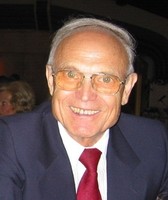