To share your memory on the wall of George Nelson, sign in using one of the following options:

Provide comfort for the family of George Nelson with a meaningful gesture of sympathy.

George lived a life of utmost integrity, known for his strength and wisdom both at home and throughout the business community. He was proud of his service in the Canadian Armed Forces in his younger years, and equally proud to own and operate G.M. Nelson Welding, Ltd. for fifty years. George was a pillar in the community, and his shop became a testament to his character… a popular meeting place for many, to begin their day with sarcasm and endless laughter, over many a cup of mediocre coffee. Those who knew George, with his sharp wit and brutal honesty, held him in the highest regard. Likewise, George cherished each of those relationships, often saying that he didn’t miss the work, but he missed the people.

Of his family, George was incredibly proud. He was an exceptional role model, supporter and provider. He laid out the foundation for each of his children to become strong and independent. He didn’t protect them from the lessons of life, but he was ever present with his no-nonsense, practical insight to enable them to overcome adversity and forge ahead. George will forever live in each and every one of them.

To his loving partner, Irene, George was deeply devoted. Together, they enjoyed many activities (bowling, fishing, dancing, snowmobiling, camping, etc). Though the challenges of the golden years limited these activities, George continued to cherish the love of his life and their time spent together.
The family would like to thank the staff, nurses and doctors at Health Sciences North – 5th Floor South Tower for taking such great care of George and also a very special thank you to the Sudbury Paramedic Service for their excellent care and compassion.

Visitation at the Jackson & Barnard Funeral Home (233 Larch Street, Sudbury), Thursday, May 16th, 2019 from 2-4 & 6-9 pm. Cremation at the Park Lawn Crematorium. Donations to the Heart & Stroke Foundation, or a charity of your choice would be appreciated by the family.
Read Less

Donations are being accepted for: HEART AND STROKE FOUNDATION OF ONTARIO.

Consider providing a gift of comfort for the family of George Nelson by sending flowers.

We encourage you to share your most beloved memories of George here, so that the family and other loved ones can always see it. You can upload cherished photographs, or share your favorite stories, and can even comment on those shared by others. 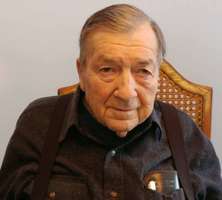