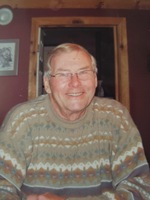 It is with great sadness that we announce the passing of Dale Johnson Muirhead at the age of 84. Dale passed away on May 8, 2022, at the Maison McCulloch Hospice in Sudbury, ON.

Born and raised in Coniston by his parents Ruby & Robert Muirhead (predeceased), Dale went on to marry Marilyn Ferguson in 1961 (predeceased). Dale and Marilyn lived in Lively, enjoying their camp on Fairbank Lake for many years. Dale will be lovingly remembered by their son, Craig (Ottawa).

It was in 1995, Dale met and married Marlene Ranta Edwards (predeceased). They enjoyed travelling the world together and entertaining and socializing with friends. Dale will be sadly missed by Marlene’s children, Jody (Gary Marin), Steven, and Lianna, and will be lovingly remembered by his grandchildren, Jason Godin (Cristal), Zachary Dowdall, Sydney Dowdall, and great grandson, Reid Godin.

Dale was predeceased by his parents Ruby & Robert Muirhead and his siblings; his brother George Muirhead, his sister Jean Knarr, his sister Ruth Davis, and his sister Betty Rome.

Dale retired from Inco (Vale) during the summer of 1994 after 37 years of service where he worked as an Electrician. Dale and Marlene renovated Dale’s camp on Fairbank Lake and made it their permanent home after their marriage. Dale’s love for his home on Fairbank was immense, and he enjoyed spending summer days outside puttering with his many projects, touring the lake on the pontoon boat, BBQ’ing, or just enjoying a drink while sitting on the deck or down by the lake on the dock. He enjoyed having company and spending time with his Fairbank “family” of neighbours and friends. His choice of sports was watching a Blue Jay’s game and a good curling match! In earlier years, Dale was a very active member of the Fairbank Lake Camp Owners Association where he was a Director and involved with the water testing and seasonal lake markers. For many years, he could be found on the Snowmobile Trail with the Walden Sno Runners as a Trail Patrol Officer clearing trails and enjoying the outdoors.

Dale continued to host family dinners for Christmas, Thanksgiving and Easter. The afternoon always started with everyone enjoying a hot sauna, followed by family dinner! Dale never had a problem giving up his kitchen to other family chefs. Dale built a beautiful Finnish sauna with Marlene, which was enjoyed by all of us. It was the most difficult decision Dale had to make when he sold his home on Fairbank in August of 2021, when he moved into Meadowbrook Retirement Residence in Lively.

Dale struggled with some health issues after he moved into Meadowbrook, leading him to make the decision to recently move into the Hospice. The family would like to thank Dr. Centis, his family physician, Dr. Janni, his Oncologist, along with the many PSW’s and nurses that took care of him at his home over the past months. Special thanks to Sherry McArthur for her role in Dale’s care. We are also grateful to the nurses, PSW’s, and the Nurse Practitioners at Maison McCulloch Hospice for their care, support and understanding.

We would especially like to thank Dale’s cousins, Dorothy Wilson and Grace Tuttle, for all of their support and help provided to Dale over the past several months. Their dedication was unwavering, and their commitment was true. Dorothy recently spent long days visiting and caring for Dale at the Hospice.


Cremation has taken place. As per Dale’s request, there will be no service or visitation. A Celebration of Life will be held at a future date. In lieu of flowers a donation to the Maison McCulloch Hospice would be appreciated – www.maisonsudburyhospice.org/donate