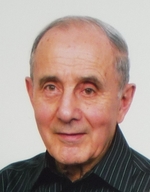 It is with heavy hearts that we announce the passing of our beloved father, Walter Shelegey of Coniston, on May 3, 2022, peacefully at home, surrounded with love, at the age of 96.
Predeceased by his loving wife Olga (Struk) in 2014, and his parents John and Mary Shelegey. Proud and loving father to Bill, Michael (Janice), Stephen (Ann), and John (Leanne). Grandfather to Lauren, AJ, Stephanie, Scott, and step grandfather to Courtney (Sean). Walter is survived by his sister Ann Dolhy (Ted) of Coniston, sister-in-law Gloria Struk (Bill Struk predeceased), and nephews Paul, Andrew (Lisa), Dan (Sandra), Rob (Allison), and niece Roxanne (Jeff). As well as relatives in Ukraine. Walter lived a full and blessed life. His journey began in western Ukraine on June 27, 1925, and emigrated to Canada with his mother, to reunite with his father in Coniston in 1939. In 1961 Walter married his life partner Olga, and together they devoted themselves to raising 4 successful sons. His 40-year working career, advancing through various jobs, began at the Inco Coniston smelter, and ended in 1983 with the Inco Construction group at the Engineering building in Copper Cliff. A devoted parishioner of St. Michael's Ukrainian Catholic Church in Coniston, Walter graced the congregation for many years as a Cantor with his incredible voice. He was also a member of the Dnipro Ukrainian Choir, and together with our mother toured the world singing. Walter was very musical, not only with his voice, but also as a talented trumpet player with the Coniston Town Band and later with his own Orchestra (The Royal Serenaders), performing at various functions in the Sudbury area. Walter enjoyed gardening, blueberry picking, spending time with his grandchildren, and working on projects at camp. Walter was always quick to help his sons with their own projects also.
Walter was a truly good-natured individual, with an infectious smile and twinkle in his eye. He was very social, and a real people person. The family would like to acknowledge and thank Walter's oldest son Bill for his 8 years of devotion and dedication as Walter’s primary caregiver. Walter's family also extends their thanks to his PSW Pauline Cote for her extraordinary care and devotion. Memorial donations to the Alzheimer's Society or the Red Cross Humanitarian Aid for Ukraine would be appreciated. Resting at the Jackson and Barnard Funeral Home 233 Larch St. Sudbury, friends may visit between 4-8pm Friday, with Panakhyda at 7pm. Funeral Mass at St. Michael's Ukrainian Catholic Church in Coniston Saturday, May 7th at 9am. Internment at the Civic Memorial Cemetery, Sudbury. For donations or messages of condolence, www.lougheedfuneralhomes.com