To share your memory on the wall of Thomas Ainsworth, sign in using one of the following options:

Print
In loving memory of
Thomas “Tom” Ainsworth 98 years. Passed away peacefully on Tuesday, May 25th, 2021 at Pioneer Manor.

Tom was born on September 5th, 1922 and grew up in Westfort in Fort William ON. He moved to Geraldton in h... Read More
In loving memory of
Thomas “Tom” Ainsworth 98 years. Passed away peacefully on Tuesday, May 25th, 2021 at Pioneer Manor.

Tom was born on September 5th, 1922 and grew up in Westfort in Fort William ON. He moved to Geraldton in his early twenties and worked at Hard Rock Gold Mines as a surveyor helper and then as a surveyor. He met the love of his life, his wife Signe (nee Hermanson) predeceased in 2002, while there. He returned to university and obtained his Mining Engineer degree, then he and Signe moved to Atikokan where he was employed with Steep Rock Iron Mines, they had three boys Tom, Jim & John while living in Atikokan. Due to a mine closure Thomas went into teaching high school which took the family all the way to Delhi in Southern Ontario. Then it was on to Sudbury in 1966 where he worked as a teacher at Lockerby Composite High School until his retirement in 1986. His favorite saying was “To get the answer just crank the handle.” He thoroughly enjoyed his place on Manitoulin Island where he would spend his summers puttering around as he put it. He had a few dogs over the years, Skipper, Pixie, & Sammy, which he always spoke fondly about to his family and friends. He will be sadly missed by his three boys and their families who would like to say thanks to the great care provided to him during the last several years at the Walford on the Park retirement residence in Copper Cliff and Pioneer Manor long term care home in Sudbury.

At his request there will be no visitation or service. Cremation at the Park Lawn Crematorium. Donations to CNIB or War Amps would be appreciated by the family. Arrangements entrusted to the Lougheed Funeral Home. For donations or messages of condolence www.lougheedfuneralhomes.com.
Read Less

Donations are being accepted for:
CNIB War Amps

We encourage you to share your most beloved memories of Thomas here, so that the family and other loved ones can always see it. You can upload cherished photographs, or share your favorite stories, and can even comment on those shared by others.

Posted May 28, 2021 at 12:26pm
We were so sorry to hear of Tom’s passing. He had a great life and we are sure he will be missed .
Much love
Gerald and Doreen Ainsworth and families.
Comment Share
Share via: 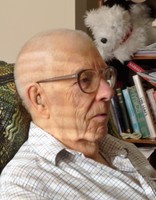