To share your memory on the wall of Roger Cunningham, sign in using one of the following options:

Print
It with heavy hearts, that the family announces the passing of Roger Earl Cunningham 92 years on Saturday, April 3, 2021 at Extendicare Falconbridge.

Beloved husband of Meta (nee Henselait) predeceased in 1999. Loving father of Dieter C... Read More
It with heavy hearts, that the family announces the passing of Roger Earl Cunningham 92 years on Saturday, April 3, 2021 at Extendicare Falconbridge.

Beloved husband of Meta (nee Henselait) predeceased in 1999. Loving father of Dieter Cunningham (Roberte) and Brigitte Thompson (Morris). Cherished grandfather of Mitch Thompson and Craig Cunningham (Amanda) and great grandfather of Allison, Emmalyn, and Kris. Predeceased by his parents Earl and Olive Cunningham (nee Ferguson). Survived by his bother Jim Cunningham (Rona) and nephews Scott (Trish) and Trevor (Lori). He will also be missed and remembered by extended family members and friends.

Roger was born in Port Elgin, Ontario on January 21st, 1929 in a small farming community known as Burgoyne. In 1962 he attended the Radio College of Canada in Toronto which was quite an adventure for a small-town guy. After graduating, he moved to Sudbury and accepted a position with Canadian Pacific Railroad as a Testing and Regulating Technician. The job was incredibly detail oriented and involved tracing problems in the telex network through miles of wires and switches. After retiring from the CPR, Roger divided his time between his two passions, gardening and his camp on the Wahnapitae River. He loved to fish and even though he was often “skunked”, he was a true believer in the saying that “A bad day fishing is still better than a good day at work.” Roger was also a proud member of the Masonic Order for 50 years. His love and memory will be cherished in our hearts forever.

The family would like to thank the staff at Extendicare Falconbridge 3rd floor for their compassionate care and support.

Due to current COVID restrictions, there will be no visitation or service. Cremation will take place at the Park Lawn Crematorium with burial alongside his wife in the Civic Cemetery. Donations to the Alzheimer’s Society or Heart and Stroke would be appreciated. Arrangements entrusted to the Jackson & Barnard Funeral Home. For donations or messages of condolence www.lougheedfuneralhomes.com.
Read Less

We encourage you to share your most beloved memories of Roger here, so that the family and other loved ones can always see it. You can upload cherished photographs, or share your favorite stories, and can even comment on those shared by others.

Posted Apr 09, 2021 at 10:54am
I can still picture him in his beautiful garden . So sorry for your loss. Mary and Chris Martel.
Comment Share
Share via:
PV

Condolences to the family. I fondly remember working along side Roger at the CNCP office on Elgin St. Paul Valli 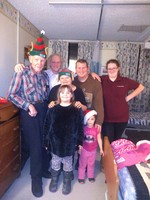