To share your memory on the wall of Pietro Baldassarre, sign in using one of the following options:

Print
There will be a private family ceremony held at the Civic Mausoleum on Saturday, April 3rd, 2021.

Donations are being accepted for: THE NORTHERN CANCER RESEARCH FOUNDATION.

Consider providing a gift of comfort for the family of Pietro Baldassarre by sending flowers.

We encourage you to share your most beloved memories of Pietro here, so that the family and other loved ones can always see it. You can upload cherished photographs, or share your favorite stories, and can even comment on those shared by others.

So sorry to hear of Pietro's passing...I always pass on to my wife my many fond memories of their visit to our house as well as visiting your place ...and how when my Dad grew old he would walk all the way from his place to Charlotte to spend some time with Dad...what a kind person....our sympathies go out to all the family and hope you enjoy all the great memories he left behind....Luigi Santoro and Lisette Bernier

Posted Mar 31, 2021 at 12:17pm
Dear Mary , Luisa & Families
My Deepest Condolences to You all on the loss of Your Father. I am sure he is so happy to be reunited with Your Beautiful Mom. May Your Wonderful Memories that You Cherish help get You through this difficult time.
Liz (Bartolucci) & Garry Spry
Comment Share
Share via:

Posted Mar 31, 2021 at 12:08pm
Dear Mary and family,
Our deepest, heartfelt condolences on your Dad’s passing. May he Rest In Peace and for sure will be surrounded by his loved ones in Heaven. Keeping the family in our thoughts and prayers during this sad time 🙏🙏
Patricia ( DiPietro) and Doug Draper
Comment Share
Share via:
DD 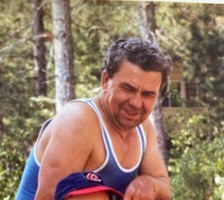