To share your memory on the wall of Bazil Jewers, sign in using one of the following options:

Bazil was born in Necum Teuch, Nova Scotia on April 6th, 1949, a small but friendly town that shaped him to be a man with incredible work ethic, combined with that famous East coast charm you couldn’t help but love. He moved to Creighton, Ontario when he was 18, where he found work as an underground hard rock miner for INCO (34 years). While working there, he joined a Mine rescue team where he proudly competed in Provincial competitions against the best mine rescue personnel in the industry. Whether at work or at home, his bravery to tackle any task, no matter how daunting, inspired those who knew him. Bazil had a love for classic muscle cars. Restoring, racing, and cruising. He spent much of his time learning to play guitar, a fairly recent but lifelong aspiration. Going out for seafood, kayaking and mud bogging on the ATV, always put a smile on his face. Classic western movies and his beloved Maple Leafs was another of his many passions

Per Bazil’s wishes, there will be no visitation or service, cremation at the Park Lawn Crematorium with burial alongside his wife Christine in St. Stanislaus’ Cemetery. Donations to NOFCC would be appreciated by the family. For donations or messages of condolence www.lougheedfuneralhomes.com.
Read Less

Consider providing a gift of comfort for the family of Bazil Jewers by sending flowers.

We encourage you to share your most beloved memories of Bazil here, so that the family and other loved ones can always see it. You can upload cherished photographs, or share your favorite stories, and can even comment on those shared by others.

Posted Apr 03, 2021 at 07:22pm
While no one and nothing can fill the hole created by the loss of your husband Bazil Emory Winslow Jewers, I know that he would want you to think of all the joy, love, and laughter that remains in the world. It may seem out of reach right now, so when you’re ready, I am here with a smile, a hug, and bits of cheer. I am thinking of you and sending heartfelt sympathies and condolences. From Robert Lowe 902 429 6137 in Halifax, Nova Scotia
Comment Share
Share via:
SH

Posted Apr 03, 2021 at 05:25pm
We were so sorry to hear or of Bazil's passing Evelyn. It was nice that you both could come down to the family reunion and meet Bazil's relatives. I know he really enjoyed that. Know that we are thinking of you and the rest of the family.
Comment Share
Share via:
SM

Posted Apr 01, 2021 at 12:03pm
The Family,
So sorry to hear of Bazil passing. I have many great memories of Bazil growing up in the small community of Necum Teuch, Nova Scotia . I was so pleased to see him several years ago. Cherish your wonderful memories!
My deepest Sympathy!
Sincerely,
Merrill MacDonald
Comment Share
Share via:
BK

Posted Mar 31, 2021 at 04:06pm
Our deepest east condolences to Evelyn and the entire family. Baz will be missed by so many. Whenever you saw Baz he had a big smile on his face and a Tim Horton’s coffee in his hand. Rest In Peace.
Comment Share
Share via: 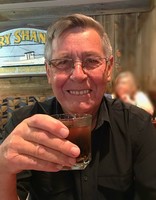