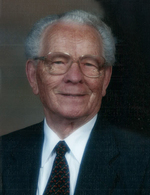 It is with deep sorrow that the Ilja Buz family siblings announce the death of their father, Sunday, November 29th, 2020 in his 100th year of life. He left this earth to meet his God and to reunite with his precious wife, Tamara, predeceased May 2015.
Ilja was born in a village not far from Komsomoloskoye, state of Chuvasia, Russia, to Alexei and Daria Antonov, and is survived by his sister Vera Antonov, Chuvasia. He is survived by his children: Irene (George Aniol) of Sudbury; Ludmila of London, Ontairo; Tatjana (Duncan Pitts) of Florida; Tamara (Peter Bolton) of Durham, Ontario; and Richard (Melissa) of California. Ilja is grandfather to Michael, Donna, Karen, Darrell, Jordan, Larra, Natasha, Rochelle, Natalia, Angelina, and Sophia; and great grandfather to Andrew, Matthew, Hannah, Joseph, Francis, Louis, and Helena.

After graduating from school in his village, Ilja continued his education in Cheboksary, Chuvasia, in Theatre Arts. While living in that city, which sits on the Volga River, he also worked as a broadcaster for a radio station until such time as he was drafted into the Russian army to serve in the Second World War.

Ilja was captured by the Germans and was a prisoner of war from 1941-1945. Upon his release, he met up with the American army and worked in their kitchen as a dishwasher, then was moved to Munich refugee camp until April 1947. Having escaped from this refugee camp, to avoid repatriation, Ilja made his way to Leige, Belgium, where he found work in a coal mine. It is here that Ilja met his wife, Tamara.

Ilja was determined to immigrate to Canada, a land of hope for his family. He worked hard in the coal mine for six years, saved his earnings, and finally saw his dream come true when he landed by ship in Quebec City in July, 1953. Travelling by train, he arrived in Sudbury with his wife and three daughters to a house arranged and prepared by a friend he had met in Germany. Ilja took odd jobs, including work in a lumber camp in Chapleau, until finally getting a job with Falconbridge in the smelter, where he worked for 30 years, retiring in 1984.

Over the years, Ilja took courses to enhance his communication skills and to provide him job opportunities on the side, fixing TVs and wiring homes. After retirement, at the age of 66, he bought a computer, took computer courses, and typed his memoirs. He was also inspired to take a course in religion at Laurentian University. A very bright man, Ilja learned well and flourished in his abilities to pick up more than half a dozen languages, some of which he picked up in Europe. He loved communicating by computer with distant relatives and friends in Siberia, Chuvasia, Russia, Canada, and the USA. Another hobby he enjoyed was gardening, which made him proud of what he was able to reap at summer’s end.

Ilja will be remembered for his love of family, his smile, sense of humour, wisdom, and his storytelling. His mind was sharp to the end of his time. He was a man of faith, and having experienced his war years at a young age, he realized he had nothing to fear about life and death. He knew his name was recorded in the Book of Life; God would share him with us and take him “home” at the appropriate time. He left a rich legacy and will be remembered and missed by all who knew him.


Funeral Service in the
R.J. Barnard Chapel
Jackson and Barnard Funeral Home
233 Larch Street, Sudbury
Wednesday, December 16, 2020 at 11am.
Friends may call from 4-8pm Tuesday and after 10am Wednesday.
Due to COVID-19 Pandemic Directives, 50 people or fewer permitted in the visitation room, and 80 or fewer in the chapel. Face masks are mandatory. For those unable to attend, the service can be viewed by livestream: https://www.oneroomstreaming.com/view/authorise.php?k=160702365088604
Interment in the Civic Memorial Cemetery.
In lieu of flower, anyone wishing to make a donation in Ilja’s memory can do so to All Nations Church Building Fund, where it will be gratefully appreciated. For donations or messages of condolence, www.lougheed.org