To share your memory on the wall of Gerald McColeman, sign in using one of the following options:

Print
It's about the journey, not the destination.

Gerald (Gerry) Franklin McColeman was born on the shores of Minnow Lake and it was from there that he left us on September 11, 2020. Raise a glass and toast to a man who squeezed every ounce ... Read More
It's about the journey, not the destination.

Gerald (Gerry) Franklin McColeman was born on the shores of Minnow Lake and it was from there that he left us on September 11, 2020. Raise a glass and toast to a man who squeezed every ounce out of his 84 years.

The second eldest of six kids, Gerry grew up in Minnow Lake, attended Sudbury High and forged lifelong friendships with the “Minnow Lake boys”. A lifelong learner, he received a B.A. from Queens University and a MEd from the University of Toronto. He developed a love of sports early on and was a self-professed “athletic supporter”. On any given weekend, he could be found simultaneously watching baseball, hockey, basketball, golf and curling on TV!

In August of 1959 he married his match, Judy Greenwood, and moved to Kitchener to begin his career in education, teaching at Waterloo Oxford. Soon the call of rocks, trees and lakes drew the young couple back to the North. Gerry accepted a teaching job as Math Department head at Levack District High School. They fell in love with small town life in Onaping and established themselves deeply in the community.

While he loved the life they were building in Onaping, his desire to see the world led him to apply for a teaching position at CFB Zweibrucken, Germany. Jude was keen, so off they went. Gerry taught math on the base during the week and they explored Europe on weekends. All that carefree gallivanting was curtailed by the arrival of Andrea on Christmas Eve 1965. The North beckoned them back to Onaping and not long after, Jane joined the family in 1968.

With the family ‘complete’ Gerry’s feet became itchy again. His plan? The family would embark on a year-long sabbatical that would take them around the world on the ocean liner SS Oriana, making a six month stop in Australia. Assets were liquidated, the house in Onaping was rented, and they were scheduled to leave when the news broke that the family would soon grow by one! Kate arrived in 1970, in the heat of the Australian summer over Christmas. Ger, Jude, their four-year-old, two-year-old and infant then resumed the adventure which included sailing up the coast of Africa and touring the UK and Scotland in a camper van.

Throughout the 70s and 80s, Gerry held administrative roles as Vice Principal at Chelmsford Valley District Composite School, eventually returning to LDHS where he was Principal until his retirement in 1992. Well respected by teachers and students alike, he forged many lifelong friendships in his 33-year teaching career. Up until the pandemic, the LDHS teachers still managed to gather on the first Tuesday of every month for lunch and a catch up.

With the nest empty and retirement in sight, Jude and Ger returned to Sudbury and took up residence on Greenwood Drive. This Ramsey Lake-side home soon became entertainment-central and many a gathering was enjoyed there. Retirement brought more travel opportunities. Whether it was road tripping with friends, or taking trips to visit family, the destination never overshadowed the journey. Always with a map in hand, they preferred the scenic back roads to the main highways, and never passed up an opportunity to take a ferry! They would take turns at the wheel until happy hour, when they would stop for the day and set up camp.

An avid reader, Gerry took it upon himself to keep print journalism alive. Multiple daily newspapers, magazines, maps and atlases could be found strewn about the living room on any given day. The Saturday Globe was religion -- the Pursuits Section was paramount and the crossword puzzle was an essential part of the following few days, with Jude filling in the answers he missed. Needless to say, he always had at least one book on the go and he passed his love of reading to his kids and grandkids.

Volunteering was a big part of Ger's life. In Onaping he belonged to the Lion's Club, was heavily involved at the Curling Club, coached the high school boy's curling team, and was on the executive at the Ona-Lac Canoe Club. In later years, he joined Jude in playing a pivotal role in bringing the Dragon Boat Festival to Sudbury. He also volunteered for the Jazz Festival, and worked with the church doing Out of the Cold dinners.

Gerry’s wife and lifelong co-pilot, Judy, left us in 2012. Taking care to 'never refuse an invitation', the subsequent years were spent enjoying time with family and friends, and continuing to be a dedicated armchair athlete. The lifelong would-be luddite even embraced technology! He loved his iPad and grew to cultivate a mean emoji library while texting. He continued to travel, including Jays Spring Training in Florida, a visit to brother Doug in California and countless trips to the West and Whitehorse where he enjoyed crosswords, reading and happy hour in a different chair, each with more spectacular views.

His three daughters are left to carry on the road trip tradition: Andrea (David Petkovich) in Whitehorse; Jane Farquhar (Neil) in Sudbury, Kate (Doug Kilgore) in Toronto and grandchildren: Sara (Scott), Hannah, Ben, Phoebe and Elliot. He also leaves behind his sisters and brothers: Colleen Rinta (Edwin, pre-deceased), Phoebe Cliff (Bob), Gary, Doug (Karen) and Sandy (Janet) along with many nieces and nephews. He will be missed by his closest friends Jazz and Joyce Dickson, the Friday Night Supper Club and cousin Pat James (John, pre-deceased). Gerry was predeceased by his parents Frank and Lila and his sister-in-law Diana Dean (Paul).

To honour Gerry’s memory (aka: Uncle Growly aka: The Big Guy aka: Sir), try a crossword puzzle, watch, literally, any sport on TV or lose yourself in a good book. Ignore the GPS and take a road trip with a good ol’ paper map. Explore the roads less traveled. Don't forget, no matter what your day looks like, pause at four o’clock for happy hour, and raise a toast 'to absent friends'.

Immense gratitude to all of the nurses who took such great care of Gerry in the final days, and to Dr. Crichton for his care and compassion.

Gerry’s wish was to gather friends and family, near and far, to share stories and celebrate a life well lived. Given the pandemic, the family plans to have a Celebration of Life when it is safe to travel and we are able to gather without restrictions.

For those wishing to make a donation in Gerry’s memory, the family has chosen the following organizations: HSN Cardiac Care, Finlandia SISU Foundation and the Maison McCulloch Hospice. Arrangements entrusted to the Lougheed Funeral Home. For donations and messages of condolence, www.lougheed.org.
Read Less

Consider providing a gift of comfort for the family of Gerald McColeman by sending flowers.

We encourage you to share your most beloved memories of Gerald here, so that the family and other loved ones can always see it. You can upload cherished photographs, or share your favorite stories, and can even comment on those shared by others.

Posted Sep 19, 2020 at 10:02am
Gerry was an empathetic teacher and principal who taught our three children at LDHS. But he was much more than that...he was a community advocate who mobilized us all to save LDHS many years ago. Because of his actions, we were able to keep LDHS open for our students for 20 more years! Rest In Peace with Judy. Irene and Tom Callaghan
Comment Share
Share via:
S

Posted Sep 16, 2020 at 07:10am
To Gerry's family - please accept out sincere condolences at this difficult time. Judy and Gerry had been friends of ours for many years and we were saddened to hear of his death. Judy and I knew each other from way-back - in Sunday School classes at the Church of the Epiphany in Sudbury and somehow we always found something funny whenever we were together. That friendship lasted throughout our lives and we spent time together whenever we could and that always involved a lot of laughter and good times. Judy and Gerry really did have a marriage "made in heaven" and were amazing parents to their 3 daughters then later on grand-children. There were good role-models for us all. Gerry will be missed by many people. Rest in peace Gerry.
Sincerely, Stuart and Eleanor Lowe (nee Fellows)
Comment Share
Share via:
L

Posted Sep 15, 2020 at 02:47pm
Mr. McColeman was VP when I attended Chelmsford high school, and only gave me a couple detentions during that time, probably fewer than I deserved. My mother knew him well, having also grown up with him in Minnow Lake. Sincerest condolences to his family.
Linda (Golder) Morgan
Comment Share
Share via:
JW

Posted Sep 15, 2020 at 12:46pm
Our sincere condolences to Gerry's family. He was the best Math teacher I (Judy) have ever had. Also as a child we, the Chapman family, were neighbours with the McColeman family in Minnow Lake. Gerry always knew us whenever we happen to be at the same place. To his children and grandchildren: Keep his memories alive. He will always be in your heart. The obituary was such a great tribute to Gerry,s life Thank you for sharing all his and Judy,s experiences. Our thoughts and prayers are with you all at this time.
Judy and Susan (nee: Chapman)
Comment Share
Share via:
KB

Posted Sep 14, 2020 at 10:04pm
A wonderful individual that greatly influenced my life. From our curling coach to laying the foundation to who I became in life. I will raise a toast to an amazing man. Cathy and send our sincere condolences.
Comment Share
Share via: 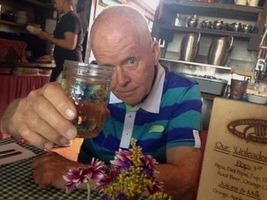