To share your memory on the wall of Gina Scagnetti, sign in using one of the following options:

Revered family matriarch Gina Scagnetti (Notolini) has released the firm grip she held on life for 97 years. A Sudburian for sixty years, she died Sept.1, 2020 at Bluewater Health in Sarnia, the city where she h... Read More
SCAGNETTI, Luigina (Gina)

Revered family matriarch Gina Scagnetti (Notolini) has released the firm grip she held on life for 97 years. A Sudburian for sixty years, she died Sept.1, 2020 at Bluewater Health in Sarnia, the city where she has resided since 2009. Predeceased by husband her caro Guerrino in 1991, Gina was cherished mother of Marisa Morettin (Richard) and Rita Scagnetti (Phil Park). Her grandchildren, Genevieve Marchesin (Elvy), Mark and Christopher Morettin, Adam and Sylvia Park, and great granddaughters Sapphira and Daniella Marchesin miss her boundless love. She served as second mother to nieces Loretta Benedetti and Tina Valle. “Zia Gina’s” many nieces and nephews will feel her absence acutely and will remember her with great fondness.

Gina and Marisa joined Guerrino in Canada in 1949, when Gina said goodbye to four siblings in the Friuli province of Italy; they have all predeceased her. The Scagnetti family made a home on Copper St., where, for a time, four family members made their homes. In Sudbury and Sarnia, Gina drew family members together with the kindness and caring she radiated.

Hers was a simple life, well-lived. Her standards were high: Gina was a professional seamstress who worked for decades at Esquire Tailors, where she was known for her speed and ingenuity. She was an impeccable housekeeper and an excellent cook. Gina was happiest surrounded by family. At gatherings she was always keen to sing; she sang joyfully and until the end.

Gina was a grand woman who touched the lives of many; their lives were better for having known her.

Many thanks to the excellent care extended by the staff at Lambton Meadowview Villa in Petrolia and Dr. Maddison and the palliative care team at Bluewater Health.

Cremation has taken place. A Private Family Funeral Service will be held in the R. J. Barnard Chapel, Jackson and Barnard Funeral Home, 233 Larch Street, Sudbury, on Saturday, September 26th, 2020 at 10am. In lieu of flowers please make contributions in Gina’s name to Canadian Cancer Society (Sudbury) or Dying With Dignity Canada. Memories and condolences may be sent online at www.lougheed.org
Read Less

Consider providing a gift of comfort for the family of Gina Scagnetti by sending flowers.

We encourage you to share your most beloved memories of Gina here, so that the family and other loved ones can always see it. You can upload cherished photographs, or share your favorite stories, and can even comment on those shared by others.

Posted Sep 10, 2020 at 12:41pm
My condolences to the family. We lived across the street from Gina and my dad Roy Werry often snow blowed the driveway. Mom and I often wondered where she went and how she was. She sure lived a long life and this was a beautiful tribute to her. She was a well loved person in your lives. My mom Theresa Werry just passed in August at 87.
Comment Share
Share via: 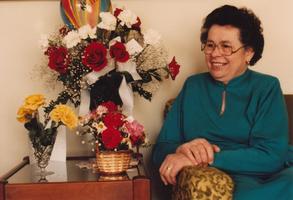