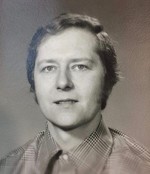 John Kingsbury Ellis
Born August 17th, 1940 in Toronto, ON. Son of Jack Ellis and Elizabeth Allen both predeceased. Loving husband of Roswitha. Father of Victoria and Bradley (Pamela). Grandfather to Phoenix, Kalifornia and Nevada. Great grandfather to Xavier, Infinity and Aurelia. John grew up in Toronto. His first job was delivering prescriptions on his peddle bike for a neighbourhood drugstore. He was a truck driver for a few years to earn money to put himself through university.
In 1966, he graduated from the University of Toronto with a Bachelor of Pharmacy. He got a job working for Tamblyn’s (same company he delivered for in his younger years – full circle as they say). In 1969, he was transferred to work in Sudbury. He worked at Woolco Pharmacy for many years before he decided to open his own drug store called Minnow Lake I.D.A later called John Ellis I.D.A in Minnow Lake. John was a very well known in the community for not only being a Pharmacist but also for his collection of antique cars which he had 12 of at one point in his life.
He will be truly missed by all that knew him. “If I knew my exact time of death, I’d be sure the sandwiches would be ready”. J.K.E
At John’s request, there will be no service. Cremation. (Arrangements entrusted to Sudbury Park Lawn Cremation Services).