To share your memory on the wall of Robin Thomson, sign in using one of the following options:

Robin was born in Sudbury on March 16, 1948, to Dr. Mac Thomson and Kae Thomson (Plaunt). He was the youngest of four children and was the beloved baby brother to them all. They remained his very close friends and confidantes for his entire life. He attended Alexander Public School (as did his children and many of his nieces, nephews and now their children), and was a proud graduate of Ridley College (Class of ‘67) in St. Catharines where he was head chorister and enjoyed alumni events for many years. He attended the University of Toronto, followed by Laurentian University (BA), and the University of Guelph (B. Commerce, Class of ‘77). He graduated to become a long-time and well-liked accountant, then investment advisor and finally manager at Thorne Riddell (KPMG) (1977-1981), Richardson-Greenshields (1981-1994) and BMO Nesbitt Burns (1994-2015). His clients adored him, and he adored them back (especially all the older ladies). He enjoyed friendly relationships with his work colleagues and missed them all after his retirement in 2015.

He went to his beloved Lake Pogamasing for the first time at three months old and every summer thereafter for the rest of his life. He loved all his Plaunt cousins dearly and there are many tales of the fun and adventures they all had together for over 70 years. Pog has always been his absolute favourite place to be during all seasons, including regular winters beginning in the 1990s. He could usually be found “putsing” around the Back 40 or reading a World War II history book with his beloved Benji curled up at his side. He spent hours driving the boat while his kids, nieces, nephews and all their guests enjoyed tubing and waterskiing. Many kids had their first “getting up on skis” with Uncle Robin at the wheel, as well as many dunkings in the lake on those wild tube rides. “Who’s your favourite uncle?!”

Robin believed in giving back to his community and was on the board of the Sudbury YMCA for nearly three decades, serving as Chairman of the Board for many years. The only person to serve longer on the Sudbury Y Board was his own father, Mac! He was very involved in bringing the Y to its downtown location, and was a great promoter of John Island Camp, where Nikki, Michael and his nieces and nephews were campers and staff members for many years. Many of them continued this love of camping into their adult years, working at camps across Canada. He was Vice-Chair and a long-serving board member of the Northern Cancer Foundation and an early member of The Rotary Sunrisers of Sudbury. He was very generous and quick to donate to many other local and national charities.

He was a true gentleman in every sense of the word and always looked dapper in his slacks, button-up shirt and sweater. Robin enjoyed many sports such as cross-country skiing, golf and curling. He was a gifted hockey player with a beautiful stride and deadly snapshot. He passed on his love of the game to his children and they loved getting together on the ice. He also loved water-skiing, even having a one time practice with Canada’s national water-ski team at Bigwinn Island in 1969. Another summer job took him to Grand Bend in 1970 where he first met the McKinley family on a memorable occasion with his sister Judy where rumour has it that he ate 2 full chickens and 11 cobs of corn. Mary Lou was instantly smitten! In July 2011, he became a member of the Hole-in-One Club at Magna Golf Course in Aurora on a McKinley golf weekend. He liked to say it was a “210 yard par three, hit with my nine iron” with a twinkle in his eye. (It was actually 160 yards and he used his 5 iron.) “Oh, and over water, too!”

Robin was funny, warm-hearted, full of life, kind and quick-witted. He was a wonderful husband, father, uncle, brother, grandfather, great-uncle, cousin, neighbour and friend. He was the type of man who would smile at strangers and he could always make children laugh. He would often showcase his fine singing voice and his fantastic whistling was a regular soundtrack at Pog and in his Kingsmount neighbourhood. He was never afraid to show affection, was loving and well-loved and he will be sorely missed every day by many, many people.

We would like to send out a special thanks to the Alzheimer’s Society of Sudbury day program, the Northeastern LHINs, his wonderful caregivers from Bayshore and Total Nursing Care, and the Palliative Care nurses and caregivers on the 4th floor at Health Sciences North - truly a special group of people. We would also like to say thank you for the loving support and kindness that we have received from family members and close friends over the last few years of Robin’s illness.

Please stay tuned for information regarding a future Celebration of Life for Robin. We will wait until the COVID-19 situation enables us to have an event where all of Robin’s family and friends can be in attendance. In the meantime, donations to the Sudbury YMCA, Northern Cancer Foundation or Alzheimer’s Society of Sudbury would be appreciated. If you would like to spend a few moments remembering this wonderful man, please pour yourself a glass of fine scotch on the rocks (or load up a bowl of vanilla ice cream with a side of homemade scones) and kick back on your lawn, patio or preferably a deck or the beach at Pog. Put on some John Prine, Johnny Cash, Kenny Rogers, Merle Haggard or your favourite CBC radio show and spend some time with the people that you love. And think to yourself, what a wonderful world.

We encourage you to share your most beloved memories of Robin here, so that the family and other loved ones can always see it. You can upload cherished photographs, or share your favorite stories, and can even comment on those shared by others.

Posted Jul 31, 2020 at 08:47am
Mary Lou + family,
My thoughts are with you and your family at this time.
I first met Robin when I in 1981 when I returned to Sudbury from school down south - at Monday Night hockey at the Sudbury arena. I just loved his ever present wit and humour - and yes, he was a smooth player on the ice.
I am so glad that you took the time to talk at length about his life - it was rich and generous.
My deepest sympathies to all of you.
Dennis Castellan

Posted Jul 28, 2020 at 01:25pm
My condolences to Mary Lou and all of Robin's family. He was a true gentleman and will be missed by this community and his many friends. My thoughts are with the family. JIM SPENCER
Comment Share
Share via:
P

Posted Jul 28, 2020 at 11:23am
Nikki and Michael, I am so sorry to hear about your father. May the love and support from family and friends give you comfort to get through this difficult time. Thinking of you Pamela Ladouceur
Comment Share
Share via: 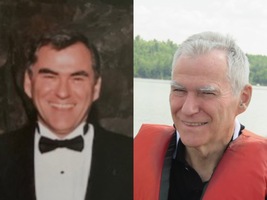