To share your memory on the wall of Robert Bateman, sign in using one of the following options:

Provide comfort for the family of Robert Bateman with a meaningful gesture of sympathy.

Donations are being accepted for: THE NORTHERN CANCER RESEARCH FOUNDATION.

Consider providing a gift of comfort for the family of Robert Bateman by sending flowers.

We encourage you to share your most beloved memories of Robert here, so that the family and other loved ones can always see it. You can upload cherished photographs, or share your favorite stories, and can even comment on those shared by others.

Posted Mar 17, 2020 at 12:17pm
Bob and Patsy's visits to our cottage were always a highlight of our summers. He was a good friend and delighted us with his great stories and joie de vivre. He will be greatly missed.
Comment Share
Share via:
DS

Posted Feb 23, 2020 at 12:24am
Bob was one of the unusual men, whom one gets to meet, socialize with and even work with occasionally. He was a sort of "vital" guy who had interests in everything. I had dinner with him and his late wife Pat years back at a federal CPC Policy gathering in Montreal and served on his executive through at least two federal campaigns. He assisted us in fundraising for a 2007 theatre project. I am so sorry to hear about his passing. A very courteous and neat gentleman, a builder of communities. I will miss him and I do believe it has only been four years since he had lost Pat. Too bad! Rest in peace, Bob.
Comment Share
Share via: 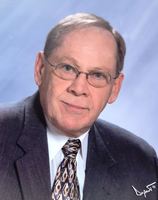