To share your memory on the wall of Nancy Wilkins, sign in using one of the following options:

Provide comfort for the family of Nancy Wilkins with a meaningful gesture of sympathy.

Nancy earned two degrees in English Literature. She was an inveterate reader with a keen intellect and impressive creativity. Nancy was vivacious, charming and generous . There was nothing she couldn’t do brilliantly: teach, sing, dance, draw, paint.

After many years in Northern Ontario, Nancy returned to Southern Ontario and began a second career as an Early Childhood Educator, for which she was highly esteemed.

In lieu of flowers, a donation in her name to the Ganaraska Childcare Centre, 130 Highland Dr, Port Hope ON L1A 2A3 would be greatly appreciated by her family.

Consider providing a gift of comfort for the family of Nancy Wilkins by sending flowers.

We encourage you to share your most beloved memories of Nancy here, so that the family and other loved ones can always see it. You can upload cherished photographs, or share your favorite stories, and can even comment on those shared by others. 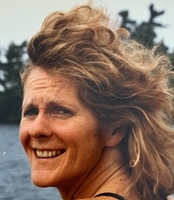