To share your memory on the wall of Peter Beijen, sign in using one of the following options:

Consider providing a gift of comfort for the family of Peter Beijen by sending flowers.

We encourage you to share your most beloved memories of Peter here, so that the family and other loved ones can always see it. You can upload cherished photographs, or share your favorite stories, and can even comment on those shared by others.

Posted Nov 28, 2019 at 01:21pm
To the dear friends of Peter Beijen:
To Sara and Michael Zimmerman,to Mike Reid and to Nathan Jongsma,
I was deeply sorry to hear of the death of Peter -for us Piet - last Friday November 22nd, 2019.
I am the 2nd wife of Ferry Beijen and I am writing you also on behalf of Ingrid Bankert, the adopted daughter of Ferry and Eef, and Manon Dankert, daughter of Ferry. As you may know Ferry passed away on September 27, 2016; he left us very unexpectedly within one and a half day! I was devastated and informed Peter by a personal note of the details which I included with Ferry’s official mourning-letter. I never received any reaction. Maybe he was already taken ill at that time or perhaps we did not have his proper address (1083 Old Wanup Rd, Sudbury, ON P3E4N1, Canada).
Actually, this was not unusual for Peter: in the all the years I have known Peter since the death of his father in July 1979, we received only one very nice personal thank-you letter in 1983 after his stay with us in our canal house in Amsterdam, with the request to keep in touch. Which we did of course, for his birthday, for Christmas and the New year and we phoned him every now and then. The last time we saw Peter was in 1990, after the death of his mother on October 8 (!) 1989.
I often asked him about his life in Canada, about his friends, about his activities other than his work, but he never told us much. He did send us some photographs of his work-shop outside his home in Sudbury. Very similar the Ferry’s workshop, who was also a skilled wood worker , a builder and constructor: what his eyes saw, his hands could make. When we moved to the south of the Netherlands in 1995 Ferry also developed skills in gardening, building a hen-house and later a geese-house. We asked Peter numerous times to come and stay with us for a while but unfortunately this never happened. I kept on sending him tempting photographs of the house and very large garden, of our dogs, cats and of the lunch/dinner parties we arranged for family and friends on the occasion of both our birthdays. He never told us that he had cats and dogs himself!!! What a shame! Lost opportunities. Still, Ferry and Peter had much in common, had some kind of a bond. It was Ferry who saw Peter off in Rotterdam when he left for Canada in 1949 or 1950. And he has missed his mate a lot. Also, Ferry was not much of a writer himself.
I am extremely pleased to learn from Peters Obituary that he had such nice and warm friends in Canada. I often worried about Peter, that he was perhaps very lonely, with just his books and his clocks around him. A conversation by phone is not that easy!
I thank you all for taking care of Peter and for being in his life and specially in his last moments.
If you could spare the time to let me know that this note has reached you and – perhaps – could let me know a bit more about Peters life and activities with you in Canada, I would be very grateful.
I am also very happy with Peters photograph! He looks so much like Ferry, they really had much in common and Ferry regretted very much that it was Peter who left for Canada.
I am very sorry for your loss and in thought I will be with you this Saturday November 30th, when you are together to celebrate Peters life.
With warm regards and best wishes, yours
Willeke Beijen-Casteren van Cattenburch,
Thull 45, 6361 HZ Nuth, The Netherlands Phone : 003145.5245735; e-mail: fam.casteren@home.nl

Posted Nov 25, 2019 at 07:11am
Dear Uncle Piet, don't forget to give my father a hug from me upstairs. Rest in peace. We will never forget you.
Comment Share
Share via:
EH 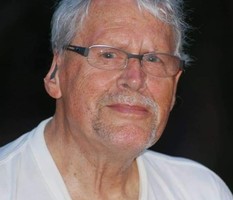