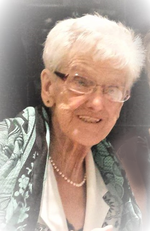 It is with great sadness that the family of Marguerite Lamothe (nee Gravelle) announce her passing on Tuesday September 25th, 2019. She was 90 years of age.

She received excellent care in her last days at Pioneer Manor by the wonderful nursing and support staff. They showed Marguerite and family much thoughtfulness and respect.

Preceded in death by her husband Ronald Lamothe and her son Robert Lamothe, she will be lovingly remembered by her daughter Monique Whitman (George predeceased) and her son Gilles Lamothe. She will also be greatly missed by her grandchildren Kim Whitman Tremblay (Enrick), Richard Lamothe (Monique), Brigitte Cayen (Mathieu), Danielle Lamothe, Andre Lamothe and Julie Lamothe along with her ten (10) great grandchildren.
Marguerite was born in Mattawa November 29, 1928. She was someone who always worked very hard and retired from Woolco/Kinney Shoes after 25 years of service in the shoe department. She loved fishing, spending time at camp, knitting and sewing.

A small religious ceremony will be held at the burial site (St John’s Cemetery, Garson) on Monday September 30th, 2019 at 10:30 am. There is a celebration of life brunch to follow for family and friends which will be held at Marguerite’s daughter’s home at 328 Autumnwood Crescent, Minnow Lake. Arrangements entrusted to the Jackson & Barnard Funeral Home.