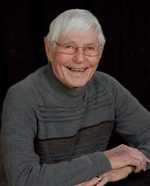 ¨God did not come to diminish our splendid responsibility, that of becoming our own self.¨
Teilhard de Chardin, The Divine Milieu

Michael O`Kane left the embrace of his wife, Carol (Spencer), to take his place in the arms of his God on September 21, 2019 in Barrie, Ontario.
Becoming his own self was a joy-filled adventure for Mike O`Kane. Born in 1928 in North Bay, to Annie (Byrnes) and Leslie O`Kane, Mike was a brother to siblings Tom (1945), Geraldine (Ken Barry), Russ (Fleurette Langlois) and John (Marie Robillard), all deceased.
His early years were imbued with the traditions of the Catholic Church. At 17, Mike entered the seminary to train for the priesthood and a life with Scarboro Missions. Ordained in North Bay in 1953, Mike`s work began as Scarboro`s head of promotions. His international efforts began in 1957 with an appointment to St. Vincent, West Indies, where he worked for three years.
In 1961, Mike and four colleagues were assigned pastoral care for the people of Itacoatiara, Brazil. Life on the Amazon began the true education of Padre Miguel as he learned not what to think, but how to think. Understanding and respecting the dignity, ingenuity and wisdom of people struggling to survive, he increasingly felt his role went beyond pastoral and sacramental service, to include human rights, social justice and economic sustainability.
In 1971 Mike was named Executive Secretary of the Papal Missions Societies and, in 1974, was elected Superior General of Scarboro, a position he held for four years.
In 1980, Mike returned to Itacoatiara to build community, enhance justice and, in his own way, liberate the poor. Questioning his efforts and future, in 1986 Mike left Brazil, returned to Canada and reacquainted with long-time friend, Carol Spencer. A new life beckoned. Holding steadfast to his faith, in 1987 he embarked on a new direction in pursuit of his personal mission.
Carol and Mike were married March 5, 1988. Together, they had devoted 70 years to the church and their communities. At 60, a new chapter began. In 1988 Mike became a Community Development Worker with St. Christopher House, an agency for immigrants in downtown Toronto and joined the Projects Committee for Latin America with Development & Peace, where he served as a volunteer.
In 1992 Mike and Carol opened O`Kane`s Bed & Breakfast in Hillsdale returning the sharing and caring philosophy he experienced in Brazil to guests who became friends. Mike became a court interpreter in Barrie and Bradford, volunteered at the jail, was active in Alcoholics Anonymous and was sought after as a non-denominational marriage officer. In 2015 Mike and Carol moved to Barrie where they continued to grow, engage and support community.
Mike embraced every moment – waterskiing on the Amazon, climbing Machu Picchu, cruising the river through Vienna, downhill skiing most winter days, conducting services on horseback, and learning to glide a fixed wing plane at 70 from an instructor 10 years his senior.
Together, Mike and Carol were a source of fun and inspiration. While they married late-in-life, they have an extensive brood of O’Kane, Barry, Devine, Spencer and other ‘children’ who see them as dearly loved mentors and role models. They also have a large, extended family that includes their Scarboro family and, close to Mike’s heart, their AA family.
A man of courage, conviction and faith Mike saw dignity and grace in all. His kindness, compassion and wisdom, as well as his active and inquiring mind, were evident to the end.
Mike O`Kane embraced his splendid responsibility to become his own self. While he will be missed, we are grateful for our time with him. His life was exceptionally well lived and his example lives on as, following his powerful lead, we become our own selves.
Friends and family are invited to celebrate Mike’s life at a visitation to be held at Adams Funeral Home, 445 St. Vincent Street, Barrie, Ontario on Friday, September 27, from 2-4 p.m. and 7-9 p.m. A funeral service will be held in the funeral home Chapel on Saturday, September 28 at 11:00 a.m. Memorial donations may be made to The Council of Canadians (www.canadians.org) or Development & Peace (www.devp.org). Messages of condolence may be forwarded to the family through www.adamsfuneralhome.ca