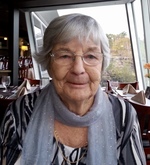 It is with great sadness that our family announces the passing of Joan Shirley Cameron (89) at home, peacefully surrounded by family on May 9th, 2019.

Joan attended the University of Alberta for nursing, graduating in the Class of 1952. She was passionate about education and continued to attend reunions with her cherished classmates. While in school, she met Robert "Bob" Alan Cameron - a handsome young geologist. They married shortly after, on her birthday in 1952.

Together they lived in Montreal and Malarctic, Quebec; Halifax, Nova Scotia; and Sudbury, Ontario as Bob pursued his geology and post-secondary teaching career. Joan especially enjoyed social gatherings, the Laurentian University International Cooking Club and taking the summers off to travel.

Joan and Bob travelled the world together, and had many adventures before Bob's passing in 2004 to Multiple Sclerosis. Joan continued her passion to see the world on yearly trips to Australia and beyond, including cruising in February of this year. However, her greatest joy in life was spending time with family and friends.

A special thank you to Joan's healthcare providers at Health Sciences North and the North East Community Care Access Centre for their wonderful and compassionate care. We are beyond grateful she was able to come home.

A Celebration of Life will be held in the summer followed by a burial at the Civic Memorial Cemetery. In lieu of flowers, donations can be made to the NCF Cancer Center, MS Society of Canada, or a charity of your choice.

Arrangements entrusted to the Jackson and Barnard Funeral Home. For donations and messages of condolence, www.lougheed.org.