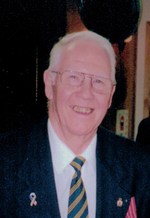 A Loving Ode to the Memory of Derald (Derry) Bruce Balson
Who Lived a full 90 Years until he passed at the Extendicare Falconbridge home in Sudbury during his sleep in the early morning of Sunday 3rd February 2019. He is now dancing up a storm with his wife Barbara (Beatty) who passed in 2010.
Derald requested no funeral BUT we will be having a “Celebration of Derald’s Life” on 11th May beginning at 2pm, Branch 76 Legion Hall 1553 Weller St in Sudbury to tell some tales and raise a glass.
Born 9 July 1928 in Toronto to Blanche Mercer Luxton to Edmond Balson, he was an only child but had many friends and relatives. Married in 1951, Barb and Derry moved to Sudbury to begin their life. Family was very important and get-togethers were the norm; the Clarks, the Beattys, the Dickerts, the Van Hornes, the Mercers, the Nashs, the Powells, the Thompsons, the Bells to name but a few.
Derald spent a major portion of his life in service to the community; as a cub master (the 22nd wolf pack), little league coach (the Yankees), with the 2nd Irish Regiment of Canada retiring as the Regimental Sergeant Major, with the Legion Branch 76 Executive and co-chairing the Poppy Fund and in the mid-70’s working with other Legion Members in raising the money required for a Northern Ontario Cancer Centre. Throw in a year of Sudbury Hardrocks football in 1954, raising 5 boys with Barb (all of whom received University degrees), then competing in the 55+ Games from 1985 to 2014 winning consistently at the Sudbury, Ontario and Canadian Seniors championships in predictive swimming, traveling to visit the extended family, and with Barb in later years to Florida and to see “the kids”, Life was busy and eventful.
Beloved and respected by sons Bruce (Virginia, Kiera, Jarret) of Calgary, Andrew (Lauri, Ashley, Aaron, Lindsay/TC and great grandson Carey in Toronto) of Victoria, Chris (Suzanne, Mac, Tori) of Lakefield, Philip (Monique, Jamie, Maegan in Parry Sound) of Sudbury, and Graham (Michelle, Benjamin, Lucas, Sarah) of Carlisle. As an Uncle will be sadly missed by Stephen and Lorry, Holly and Peter, Sandra, Stephanie, Tony, Bill, Larry and Luciana, Laura, Peg and Joe, Wendell and Teresa and the many others that I have forgotten.
In lieu of flowers, donations to MS/ Society Mended Hearts/ Alzheimer Society or RCL Poppy Fund or a charity of your choice would be appreciated.
Arrangements entrusted to Jackson and Barnard Funeral Home.
For flowers, donations, or messages of condolence, www.lougheed.org http://www.lougheed.org.

Cremation with interment in the family plot at the Civic Memorial Cemetery.