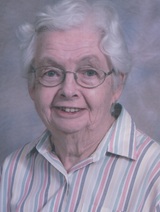 Memorial Candle Tribute From
Lougheed Funeral Home
"We are honored to provide this Book of Memories to the family."
View full message >>>
In Memory of
Mabel "Isabel"
Young
1921 - 2018
Menu
Send Flowers
Plant a Tree In Memory of Your Loved One
Click Here

Predeceased by husband Charles and daughter Adrian Vance (survived by Alan Vance). Survived and treasured by children Harold (Susan) of Phillip Island, Australia, Philip (Eileen) of Lively, ON, Alexander (Debra McIsaac) of Peterborough, ON, Frank (Helga) of Scarborough, ON and Eleanor (David Wilson) of Georgetown, ON. Fondly remembered by numerous nieces and nephews, fourteen grandchildren, as well as five great-grandchildren.
Isabel grew up with two brothers, James and John Edward, in Coniston, where her father, Jim, ran Norquay Bros. General Store, and her mother, Mabel, was an active community presence.
She lived all her life in the Greater Sudbury area, except for the summers of her youth spent on Manitoulin Island and the years spent at University of Toronto earning her medical degree in the 1940s. In addition to being a mother of six, she was a staff physician treating tuberculosis at the Sudbury-Algoma Sanitarium from the mid-1960s to her retirement in 1978. She was active in the Trinity United Church in Lively, ON, a member of Copper Cliff Curling Club, on the board of the Sudbury chapter of the Lung Association and among the first volunteers at Science North when it opened in 1984. She will be remembered for her musical laughter, passion for travel and craftmaker's talents. And her pie. Especially blueberry.

Cremation at the Park Lawn Crematorium.
Donations to Alzheimer’s Society or The Lung Association would be appreciated.